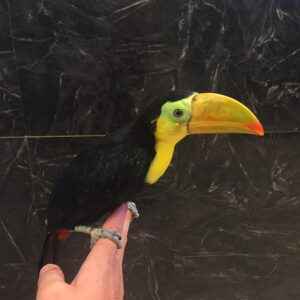 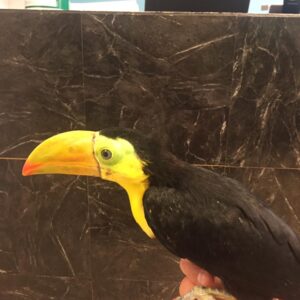 The Keel billed toucan has black plumage on most of its body but a bright yellow on its chest and cheeks. It has a circle of green around its eyes and bright red feathers under its tail. It is around 17 to 22 inches tall and weighs around 14 to 18 ounces. Males are usually larger than the females.

Like most toucans, its most notable feature is its brightly colored beak. The beak is green and orange with a tip of red and blue. Though it looks heavy, it consists mainly of a hollow bone frame and keratin (the protein that makes up fingernails). It is four to six inches long or nearly one third of the toucan’s total body length.

They use their beaks to reach for food from nearby branches that would not support their body weight. Their feather like tongue is long and agile and they use it to catch lizards and insects.

It has recently been discovered that their beaks also act as way for the toucan to regulate its body temperature. When blood flows to the beak heat is released, keeping the bird cooler in its tropical surrounding. Since birds can’t sweat this is vital to its survival in high temps.

Like other toucans the Keel billed toucan is zygodactyious. This means it has two toes pointing backwards and two forward. This it allows it to have a strong grip on tree branches as it moves from tree to tree. The toes of the keel billed toucan are blue. 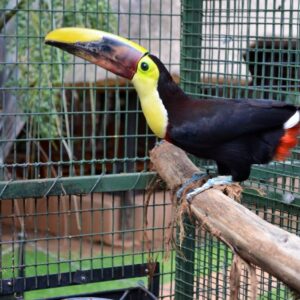 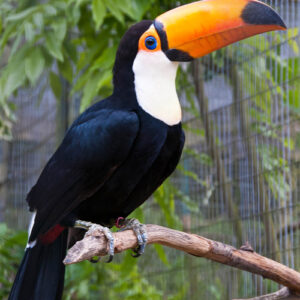 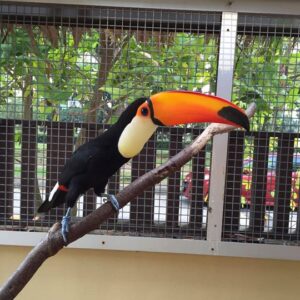 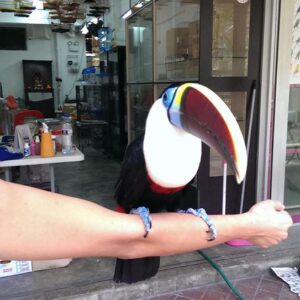